Buy PAPAYA SMALLS indica-dominant hybrid cannabis strain that is known for producing a mental calmness, though many consumers also find that this strain makes them energetic and productive.

Nirvana Seeds bred this to be their take on a Mango strain and crossed Citral #13 with Ice #2 to make their own fruit. They met their own challenge and Papaya smells uncannily like its namesake.

The taste is similar to its tropical fruit counterpart, but a spicy, peppery side also becomes apparent. The plants stay fairly short and thin, producing lots of fluffy buds with papaya-orange hairs in 8 or 9 weeks.

The Papaya strain is a favorite amongst many recreational users. Many perceive it as the ideal way to relax during the afternoon or evening. However, MMJ patients also enjoy the calmness provided by this strain. In addition, Papaya is renowned for its delicious tropical taste and scent.

Certain flavors and smells transport you to a faraway place, a million miles away from a stress-filled or monotonous day. The Papaya cannabis strain provides your senses with this exact sensation. Before you even smoke it, you’ll be dreaming of a vacation in a tropical, Caribbean paradise.

Once the high takes hold, it’s easy to imagine laying in a hammock overlooking crystal clear waters as yet another Mai Tai is on its way.

What Is the Papaya Strain?

The Papaya strain is an indica-dominant hybrid that’s a cross of Ice No.2 and Citral No.13.

Nirvana Seeds bred this strain which is seemingly its version of the Mango strain created by KC Brains. However, please note that there are several versions, including one by Verde Natural Wellness. In each instance, Papaya is a mix of Ice, Citral, and Mango.

Don’t allow the pleasantly sweet tropical scent and taste to fool you. Papaya is one of the most potent strains you’ll find. Therefore, we highly recommend that novices avoid using it if possible. In addition, some users report feeling heightened concentration for a brief period after the high takes hold.

Some people have reported that Papaya is the perfect evening strain, helping users unwind and relax.

However, the predominant sensation is one of euphoria. So, no matter where you are, it is likely that Papaya will make you feel happier and more relaxed.

Initially, you might find that a boost in energy accompanies the heightened focus. Yet it is more probable that you’ll feel calm and relaxed rather than excitable.

Even if you become energized, it is unlikely to last long. Soon enough, the body high takes over and produces a feeling of total relaxation.

However, many users admit feeling lethargic and sleepy with couchlock almost certain. There is also the possibility of getting the munchies, so we advise having some snacks readily available.

You can try Papaya during the afternoon if you have no plans for the rest of the day. Yet, if you have things to do, make sure you wait until the evening.

The initial sour smell surprises many users, who are expecting something completely different. Eventually, you will get the fruity, creamy tropical scent you anticipated. The tanginess of the fruit flavors is alluring and sets you up for a delicious tasting strain.

RELATED ARTICLE
5 Marijuana Strains That Have a Tropical Taste

Most users say they don’t taste any sourness once they start smoking Papaya. Instead, their taste buds experience an initial funky flavor that makes way for a creamy tropical delight.

The Papaya strain consists of large, round buds that tend to look like a football. However, some people suggest that they look more like a closed fist. papaya smalls

The creamy orange pistils look pleasant against the bright green of the leaves. The small trichomes sprinkled on the calyxes give you a little indication of how potent this strain is.

It is relatively easy to find Papaya cannabis seeds online. It is a robust strain that can thrive indoors or outdoors.

If you choose the latter option, please note that it grows best in a warm Mediterranean climate. Outdoors, it is ready for harvest by the end of September and can produce 25-30 ounces per plant. 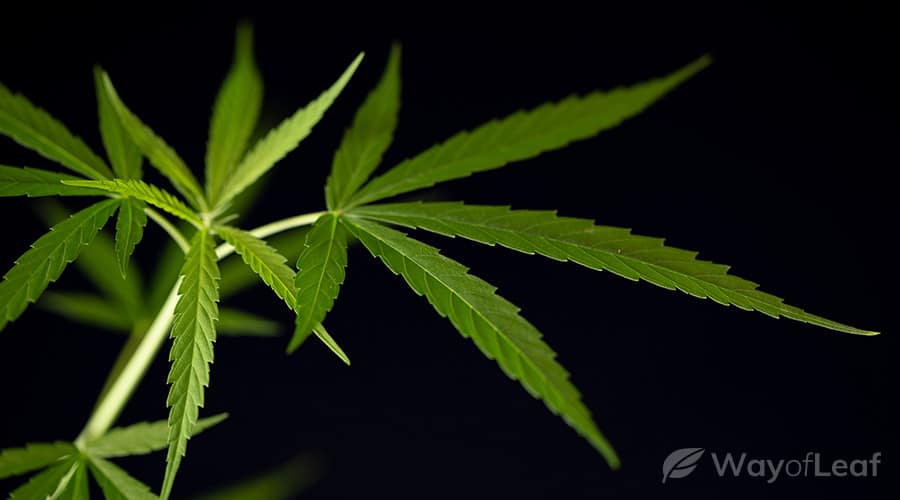 The likely yield indoors is significantly smaller at 12-15 ounces per square meter. However, as it is an indica, at least the flowering time is reasonable at 8-9 weeks. If you have enough experience, you could try to cultivate Papaya using a hydroponics setup. papaya smalls

This provides you with control of your crop’s nutrient intake and may lead to a higher yield. It would help if you also considered using the SOG method to help increase bud production.

In general, Papaya is resistant to pests and most common diseases. Therefore, it is more forgiving of novice grower’s mistakes than many other strains. papaya smalls

The Papaya strain varies greatly in terms of THC concentration. It can have anywhere from 15% to 25%, with the latter far too strong for inexperienced users. In general, the average THC is around 20%.

There is hardly any CBD in this strain. In general, it is unlikely that you’ll find more than 0.1% CBD. The lack of cannabidiol to take the edge off the THC is one reason for the intensity of Papaya’s effects.

Medical Benefits of the Papaya Strain

Papaya is very much a recreational user’s favorite. Nonetheless, it is widely used by MMJ patients for several reasons. One of the most obvious is its ability to help sedate you. After a couple of hours, you’re likely to feel extremely sleepy with little desire to move.

There is a strong possibility that you’ll fall asleep wherever you sit or lie down. As such, you might find Papaya helpful if you have insomnia. papaya smalls

The euphoria reported by numerous MMJ patients suggests that Papaya has use as a pick-me-up.

The sedative effects could also prove useful for individuals with chronic pain. If you have an issue such as back pain or fibromyalgia, you might discover that Papaya relaxes and numbs the limbs. papaya smalls

The euphoria reported by numerous MMJ patients suggests that Papaya has use as a pick-me-up. Therefore, consider trying it if you have stress, anxiety, or depression. Finally, it could result in the munchies, so think about using it if you need an appetite boost.

Possible Side Effects of the Papaya Strain

The main side effects associated with Papaya include dry mouth and dry eyes. However, as it is a high-THC strain, there is a chance that it leads to dizziness and headaches. Use it sensibly and steer clear entirely if you’re new to cannabis or have a low-THC tolerance. papaya smalls

Final Thoughts on the Papaya Strain

If you’re looking for a cannabis strain that makes you dream of a tropical paradise, Papaya is a great option. While it can boost your energy slightly initially, the high eventually causes sedation, couchlock, and ultimately, sleepiness.

You might also find that it spikes your hunger. The tropical scent lures users in, while the incredible flavor keeps them there.

Papaya is somewhat easy to grow, and it can produce a sizable yield outdoors in particular.

About this Indica Strain. papaya smalls

The cannabis strain Papaya is an indica, producing a scent that’s similar to its name. Its sweet and tropical, with flavors that are similar but have undertones of pepper and spice. Its buds are fluffy, blade-shaped, and vivid green.

Papaya was first bred by Nirvana Seeds, who wanted to create their own fruity strain. They crossed Citral #13 with Ice #2 and Papaya was born. Buy PAPAYA SMALLS Indica smalls

The THC level of this strain is known to average between 20-25%, making it quite potent. Its high is known to induce a heavy calm, making it great for anyone experiencing the jitters, hyperactivity, or problems focusing. It can help induce munchies, relieve migraines, and alleviates cramps. Papaya is a strong indica, relaxing the body from head to toe and relieving the mind of negativity. papaya smalls

Ill side-effects include dizziness, paranoia, and headache when consumed improperly. Dry mouth and eyes are to be expected.

Growers can be happy to find that Papaya is generally small when cultivated, making it good to grow indoors in slightly smaller spaces. However, it can take anywhere from nine to eleven weeks to fully flower.

We deliver direct to you the highest quality CBD ,THC and RSO Cannabis oil Products. We have ensured that our supply chain has been optimized so that your Order is  with both quality and speed.

To return your product, you should mail you to: {physical address}.

You will be responsible for paying for your own shipping costs for returning your item. Shipping costs are non-refundable. If you wikipedia.org a refund, the cost of amazon.com shipping will be deducted from your refund.

There are no reviews yet.

Please verify your age to enter.

You must be 21 years and above